I recently watched a YouTube video by Korean Englishman (영국남자) that compared the U.K.’s and South Korea’s responses to the coronavirus outbreak. The gist of the video was that South Korea did things right—the government issued clear guidelines, the public wore masks and practiced social distancing, and so on—while the U.K. did the opposite. I have seen many versions of this narrative floating around international media.

While this is probably somewhat true on a macro (policy) level, I felt a disconnect between this and what I, an ordinary college student living in Seoul, experienced in my day-to-day life. The purpose of this post is not to critique public policy—in fact, I freely admit that I am largely ignorant of politics—but rather just to document and share my personal experience.

My phone history tells me that the first emergency alert message I received regarding COVID-19 was on January 23rd, 2020. It had been sent by the Ministry of Interior and Safety. 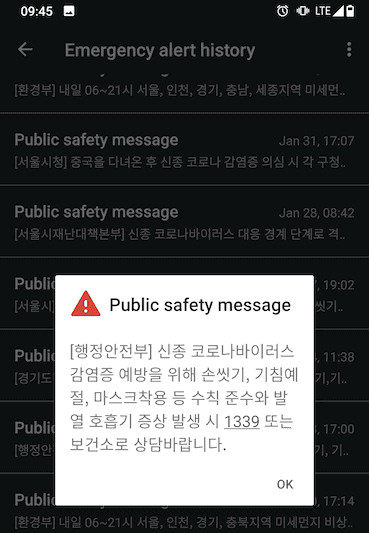 To keep safe from the new coronavirus, please adhere to guidelines such as washing your hands, coughing responsibly, wearing masks, etc. If you have a fever or respiratory symptoms, contact 1339 or a health center.

I remember ignoring this message completely. Emergency alerts are not altogether that rare in Korea. Classes are often interrupted by twenty phone blaring simultaneously, each carrying a message about “bad air quality”.

The first day I had actually noticed a change was on January 28th, the first day that I headed to the lab I was interning at after the four-day-long Lunar New Year holidays. As I began my daily commmute and walked to the subway station, I noticed that half the people on the streets were wearing masks. I observed this with interest rather than concern; I guessed that they had probably been influenced by the two additional emergency alerts that had arrived on the 24th and 27th.

On the subway, I googled something like “masks during pandemics” and found pages of sensational blog posts and news articles. Priding myself on being an objective researcher, I clicked on links to the WHO, U.S. CDC, and a couple of posts by well-known U.S. medical colleges. The WHO explicitly stated that there “has been little evidence that masks were beneficial in past pandemics such as SARs” (paraphrased quote), and that washing hands was far more important.

I experienced my first direct change in daily life on February 1st. For a while, I had been doing volunteer work on weekends, teaching English to Korean kids. In response to news of the first few coronavirus patients, the organizers decided to cancel the event until March, which was in retrospect a wise move. Of course, it still has not resumed as of June.

Around this time (early February), I began wearing a mask on a daily basis. Although I was still dubious about the benefits, I had seen government-issued canvas banners posted along roads stating that one should wear a mask within public buses and subways, and had decided to comply. There were also audio announcements played regularly inside subway stations that repeated the same guidelines. I luckily had a plentiful supply stocked up, so I did not need to buy new ones for a while.

But for people who did, February was chaotic. The price of a single mask escalated from around 500 won (~$0.5) to over 4000 (~$4), an eight-fold jump. But even this price underrepresented the demand, for soon all channels—pharmacies, convenience stores, and the endless list of online sellers—were out of supply. The public was outraged, and there were online petitions declaring that the government was failing to do its job. The press spotlighted medical personnel who pleaded to the camera that they were short of masks.

In parallel with the mask outrage, there was a flood of panic and misinformation regarding COVID-19. Pages upon pages of sensationalist news articles filled Naver, the most popular website in Korea. I paid them little attention, but many people did the opposite. I remember that one day someone shared an article on my lab’s Slack channel; it stated that “heating clothes with a hairdryer” would exterminate the virus, and that the source of this information was a prominent doctor (it turned out that he had claimed no such thing). Another time, my mother shared a lengthy message that stated that “doctors in Japan” have discovered that drinking liquid every 15 minutes would kill the virus. Yet another popular article claimed that once one caught the virus, there would be irreversible corrosion to their lungs, and thus one could never fully recover.

Everywhere—YouTube, Facebook, even TV channels—so many different things were being claimed that it was impossible to figure out which was true.

School semesters in Korea start on March 2nd. But several weeks before that date, many colleges began to announce that they would be postponing the start of the semester for one or two weeks. My school announced a two-week postponement. A week or so later, they announced that classes will be held online until April. Nearing April, another announcement was made that the online period would be extended to May, and that midterm exams would not be held. A few weeks later, it was announced that the entire semester would be online.

There was chaos among both my school and the students regarding the grading policy for the semester. Students did not want an on-campus exam for safety reasons; also, students that lived far away from the campus were highly inconvenienced as they had to travel for several hours just to take an exam. On the other hand, many professors seemed to prefer on-campus exams. After all, it was the tried and tested way of evaluating students. Designing a fair online alternative was evidently a daunting task. In the end, professors chose between two main options:

All of my classes followed option 2. This went quite smoothly, in large part due to the fact that I was only taking CS courses and programming assignments / problem sets had always been prevalent in them. Option 1 on the other hand raised many problems. Webcams are of course a meager way of preventing cheating; consequently, many students did cheat, through very easily imaginable means such as a phone outside the view of the camera.

By June, the Korean government had lowered the official severity level regarding COVID-19. Instead of “social-distancing”, the public now were to practice “social distancing amidst normal life” (일상 속 거리두기), whatever that was supposed to mean. Subjectively, it feels that daily life has gone back to pretty much normal—people go to work, pack subways, visit parks, and so on. But everyone wears a mask, even outside. Large gatherings, especially religious, are still strongly advised against, though.

There are still a few dozen new COVID patients each day; however, the alarm and media coverage of these new cases are almost zero. This is a drastic change from February to March, when each patient had dozens of news articles written about the places they had visited, their condition, and so on.

Of course, things are only “relatively normal”. Schools next semester will probably continue to hold their classes online. People will continue to spend tens of dollars each month buying masks. But I feel fortunate to be living in a country that can contain such a contagious virus to this degree, and send my prayers to others who aren’t. Hopefully, when this pandemic ends, governments of the world will get together to share what they’ve learnt—the systems that were effective, ineffective, or downright mistakes—and in the end we will all be better prepared for whatever comes next.